In an interview with the Telegraph India, Hammad Nasar (Head of Research and Programmes at Asia Art Archive) says that “the artists have taken the South Asian tradition of miniature to new heights, and then moved beyond the page to invent a new visual language, rooted in tradition but of the here and now.”

By deviating from the set traditions of Art & Literature, we end up creating art pieces that serve to be manifestation of modern times and engage its audience at so many levels. It leaves one nonplussed, thinking of how we have set free our former understanding of considering miniature art an offspring of colours and strokes; an artwork that must be aesthetically pleasing, able enough to commemorate the splendour of its times.

As defined in one of the online artiles, “Neo-miniatures retain traditional techniques while incorporating contemporary themes, and some have even deconstructed the format and articulated sensibilities that otherwise would be identified with post-modernism.”

With several neo-miniaturists contributing in the field of Art, Abid Aslam too succeeds in maintaining the individuality of his work that is being curated at O ArtSpace, titled ‘Of Land & Skies’. Born in Lahore, Abid Aslam has specific inclination towards photography and miniature painting, a connection of which can be seen in his series of paintings that give an illusion of metallic sheets. However, such an effect is achieved by using reflective sheet on traditionally used wasli. Aslam succeeds in providing a contemporary twist to the orthodox understanding of miniature for his work lacks strokes of brush & overt imagery yet has its own identity and aesthetics.

Salima Hashmi, a well known Pakistani artist, writer and curator holds the view that contemporary miniature is not really a celebration of tradition but is using tradition as a springboard for doing something that runs counter to tradition.

Unlike traditional miniature painting, Aslam significantly uses few images as symbols and leaves rest on the colours and composition of paintings on the wall to speak for themselves. He highlights the idea of power and the control of technology that has come a long way in contemporary times. Aslam says, “The art of going through a constant process and patience is actually challenging for me like how I make an artwork and then how I will own the second one by forgetting the previous one, using same material and technique”. 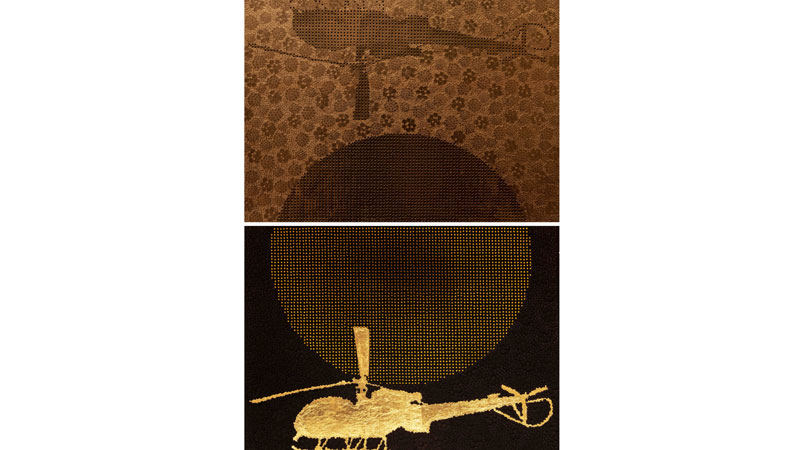 By using punching tools, Abid Aslam makes certain minuscule motifs which as a whole form the images like elephant, helicopter, pigeons and war tanks that suggest how modern technology has overtaken even the traditional means of warfare. As Aslam says, “Technology has no only affected nature and wildlife who has been the source of power used during wars but highly demolished the rich traditional practices of arts and crafts too.” The combination of magnificent colors (black, gold and silver) leaves one awe struck; the choice of colors is what make these painting so expressive and eloquent for you cannot ignore listening to them.

The composition of these series on the walls of O Art Space adds to the meaning and interpretation of these art works; each painting accompanied with another. The attention to detail is simply noteworthy for even the choice of frames are thought through. So if you are planning to give your mind food for thought then this is the place for sure!